Happy Easter! Â For those celebrating this weekend, here are some articles and videos that should get you into the spirit:

While we’re in hockey playoff season, even Don Cherry gets into the spirt… sorta :/

A Ukrainian Easter Egg from the Midwest

In the files of the Peace River Museum Archives and Mackenzie Centre is a descriptive compilation of Ukrainian Easter customs by Joyce Sirski. She documents the customs thusly: â€œEaster customs are rich in heritage. Easter is not only a three-day period, but also a cycle of 40 days known as Lent, when age-old associations with man and nature come to a religious climax with the resurrection of Christ.

As Easter approaches (Sunday the 15th on the Julian calendar and this Sunday on the Gregorian), one of the oldest Ukrainian traditions is decorating Easter Eggs known as PysankyÂ (whichÂ is plural, where as Pysanka is one). An ancient custom pre-dating Christianity in the region over 1,000 years ago, these eggs were decorated to symbolize new life that began in Spring.

To begin, first you need a few items:

Where to purchase them:

This video illustrates how the process is done:

Enjoy these hand-made crafts, while you can before they are modernized! 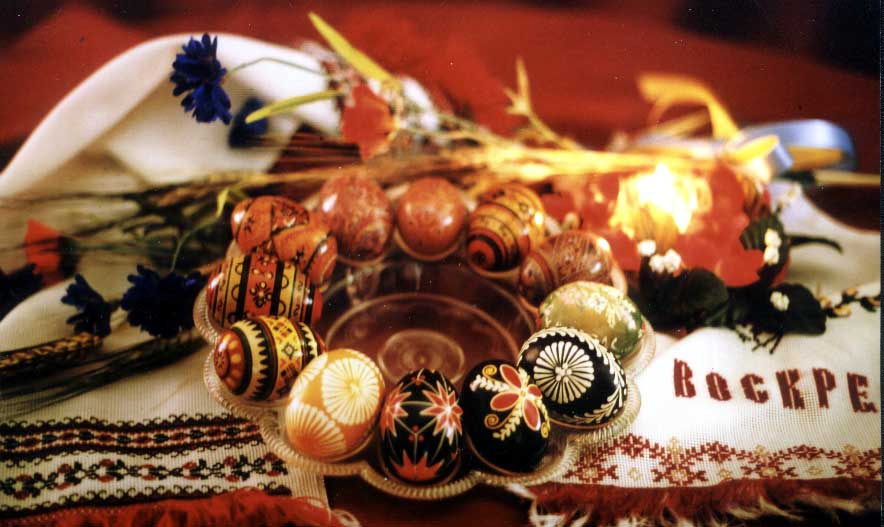 Don’t forget it’s Easter this Sunday for both the Gregorian and Julian calendars. You can read up on our Easter Sunday primer to refresh your memory, and get some varenyky recipes and some odd tips for making Paska from the Canadian Press (doesn’t everyone bake them in old cans?).Â There are also loads of authentic recipes on this Ukrainian cooking forum.

While I wasn’t able to promote all the local Easter festivals that had happened this weekend, there’s still time to get some of your favourite foods from popular stores (in Toronto there’s Future Bakery, Natalie’s Kitchen and Vatra to name a few).

If you’re going to dabble in some pysanky making, you can still get supplies from local vendors (in Toronto Koota Ooma comes to mind), as well online from Ukrainian Bookstore. Get inspired by some news stories from great pysanky makers and some in training too! For a good laugh there’s always my documented attempt from a few years ago.

And in all the food eating and pysanky making this long weekend, don’t forget to remember the religious aspect of the holiday. For the past two years both Easters have been on the same day, but next year the Gregorian calendar will have Easter fall on April 8, 2012 and Julian on April 15, 2012.

Here’s a little something to fill your weekend calendar:

Saturday at 4pm at the Revue Cinema in Roncesville (just south of Dundas West TTC station)Â is the airing of ‘The Last Journey Home’, features stories of some of the 150,000 Ukrainians forcefully deported from their homeland annexed to Poland after World War 2 under ‘Operation Wesla’ and returning 63 years later.

These Ukrainians wereÂ scattered among the hostile Polish population and condemned to assimilation. They were expelled from over 1000 villages and towns, hundreds of churches were destroyed, some 4,000 people were imprisoned and tortured in the Jaworzno concentration camp, and around 1,000 were killed during the operation and added to the list of the thousands of victims of previously carried out pacifications, executions, and torture. As the consequence of Operation â€œWislaâ€, the most western part of the Ukrainian ethnic territory ceased to be inhabited by Ukrainians.

Admission is available at the door for $15 For those of you who need a refresher, here is what Ukrainian Easter is all about. FromÂ Traditional Ukrainian Cookery (1957):

With the break of dawn on Easter Sunday a special Ressurection Service is held with a procession around the church. The most beautiful aspect of th service is the joyful heralding of a risen Christ in the singing of the traditional Ukrainian hymn “Christ is Risen” (Khrystos Voskres). The whole congregation sings in unison with a heightened feeling. At the conclusion of the service, rows and rows of food-laden baskets with a lighted candle in each are blessed by the priest. In favourable weather this impressive ceremony is performed outside on the green church lawn. Food baskets covered with richly embroidered napkins contain Easter bread called “paska” and a selection of various Easter foods along with the multi-coloured pysanky. This custom is treasured in Canada. People greet one another with the traditional Easter greeting “Voistyno Voskres!” (He is risen indeed!). It is the custom to exchange or give Easter eggs with this Easter greeting.

Immediately after the service, people return home to break the long fast with an Easter breakfast of consecrated and other food. The breakfast menu consists of cooked eggs, a variety of hot and cold meats, roast suckling pig, cheese, salads, horseradish and beet relish, and a number of delectable Easter breads and pastries. The meal begins with Easter grace and then aÂ ceremoniousÂ serving of the blessed egg, which the head of the family divides into several portions, one for each person, greeting the family with the customary Easter greeting of “Khrystos Voskres!”, and extending to everyone the very best wishes. The particular ritual symbolizes family unity and expresses hope for a happy and prosperous year until the next Easter.

Also this Easter I’ll be creating pysanky again, I wonder if they’ll turn out better than last year:

One of the most beautiful of all Ukrainian easter traditions is decorating eggs with artistic designs of a symbolic nature. In Ukrainian the decorated eggs are called “pysanky” from the word “pysaty” which mean to write. The design is actually written on the egg with a fine-pointed stylus dipped in wax, after which follows a series of dye baths. Pysanky are not eaten. The origin of this art is both ancient and obscure. Archeological excavations in Ukraine show that it wasÂ practicedÂ several thousand years before the Christian era. Originally pysanky symbolized the release of the earth from the shackles of winter and the coming of spring with its promise of new hope, new life, health and prosperity. They were associated with mythical beliefs and talismanic powers. Folklore has it that a decorated egg can avert any evil, bring good crops, and help a young maiden to win the man of her desire. After the advent of Christianity, the decorated eggs took the new symbols of the Resurrection with its promise of a better world.

The art of painting Easter eggs is still practised in Ukraine and in Canada. Time has not reduced the design to a simpler form. Each new generation strives for greater perfection, beauty, and intricacy. Ukrainians have become unrivalled experts in this interesting folk art. A painted egg may well be called a miniature mosaic.

Here are some pysanky related news this weekend:

And if you thought I made a big stink last Christmas because Mama (who’s now known as Baba to newcomers to the family) didn’t make all the food from scratch, I was shocked to see earlier this week some Paska bread that came from a national grocery store chain:

Oh I’m just kidding! I have been assured though most of our Easter meals are coming from more ethnic chains this year: Vatra and Future Bakery (although Future’s quality has been noticeably declining as of late). I hope you all have a Happy Easter and XpÐ¸cÑ‚oc BocÐºpec!