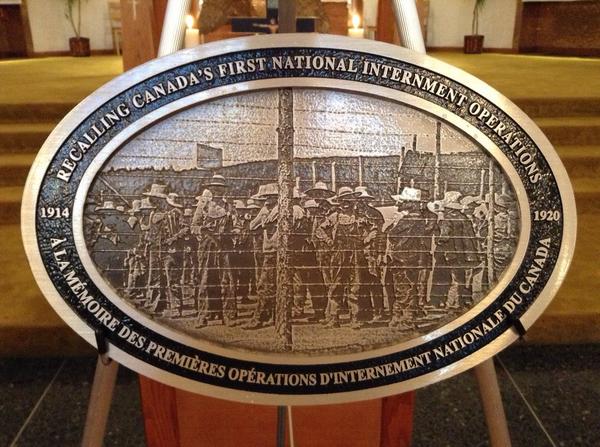 Yesterday, 100 plaques debuted all over the country to mark the 100th anniversary of Canada’s first national internment operations of 1914-1920. Below are some select photos  from these events. Click on each blue pin in the map below to see the pictures:

Also, you can read up on the news of these events:

The Google Art Project puts some of the worldâ€™s best art online. Users can visit the Met in NYC, the Tate in London, and even the AGO in Toronto. Earlier this week Worldwide News Ukraine pointed out that the project has now added two galleries from Kyiv: Saint Sophia of Kyiv and Ivan Honchar Museum of Folk Art.

Underneath the iconic golden domes of this Kyivan-Rus temple of Christianity lies over 260 square metres of rich frescoes and 3000 square metres of mosaics, many of which are still intact almost a millennium later from the 11th century.

Originally the private collection of Ivan Honchar who was charged with nationalism under the Soviets and monitored by the KGB, this collection boasts over 15,000 items from as early as the 16th century â€“ including folklore hero Cossack Mamay.

The Government of Canada also has a virtual exhibit on early Ukrainian settlers to the prairies.

Last night on the Slice channel, some Ukrainian flair was shown on the wedding show â€˜Four Weddings Canadaâ€™ where brides rate each otherâ€™s weddings and the winner receives a free honeymoon. A Toronto Ukrainian coupleâ€™s wedding was featured at St. Nicholas church near Trinity Bellwoods. The reception had Ukrainian dancers and helped them beat out the other brides for the grand prize, an all paid-for honeymoon. You can watch the entire episode online (it starts around 30:00):

Also, check out some pictures from the event:

A little late but here are some photos and videoâ€™s from last Sundayâ€™s Ukrainian choir and dancers performing at the Toronto Christmas Market:

Here are some highlights from last week’s Toronto & Buffalo Ukrainian Festivals. I apologize for the lateness as I’ve been dealing with an internet outage (still ongoing) and it’s tough to get these uploaded without it!

If you want to relive almost the entire festival, watch this massive collection of videos:

And hereâ€™s my Toronto/Buffalo Festival video recap which pales in comparison:

Here are a few select photos from Facebook (Albums one and two):