This upsets the European Union, of which Norway is not a member. In cahoots with Moscow, Brussels secretly threatens Berg with a full-scale Russian invasion unless he commits to maintaining Norwayâ€™s fossil fuel extraction under Moscowâ€™s supervision. (The United States, having recently achieved energy independence, has withdrawn from NATO and sits disinterestedly aside.) Berg reluctantly agrees to this scheme, promising his people that the insertion of Russian worker crews to restart Norwayâ€™s energy industry will be temporary.

Occupied is disturbingly relevant in light of the Ukraine crisis that unfolded two years later and the reappearance of larger-scale East-West tensions over Moscowâ€™s new-found assertiveness in Europe. Russian violations of Baltic and Scandinavian airspace and waters have become a regular occurrence. Last month the RAND Corporation published the results of a war game in which Russian troops seized the Estonian capital of Tallinn in a mere 60 hours. 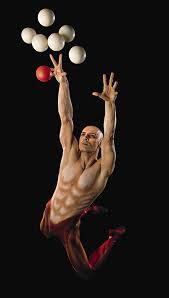 Viktor â€œKeeâ€ Kiktev, a juggler from Pryluky (2 hours east of Kyiv) amazed crowds last night to advance to the finals of â€˜Americaâ€™s Got Talentâ€™. A split decision amongst the judges, the audience chose Viktor over Rubik’s Cube wizard Steven Brundage in an instant vote during the live show.

A former Cirque du Soleil member, Viktor started juggling at the age of six, and performing at 11, incorporating breakdancing into his ball juggling routine. He joined Kyivâ€™s Professional Circus school in 1989 adding acrobatics and dance to his repertoire. With the help of Ukrainian choreographer Nikolay Baranov he starting developing his unique act, joining Cirque du Soleil in 1999.

Itâ€™s not every day Canadian and American public broadcasters team up for investigate journalism, and weâ€™re in for a treat as CBC & PBS co-produced a documentary about the evil side of Vladimir Putin â€“ and it airs first in Canada tonight at 9PM EST on CBC:

He casts a long shadow over globe. Russian leader Vladimir Putin has outlasted three American presidents and is on track to stay in power until 2024. His incursions in Georgia, the Crimea and Ukraine have rattled the West, while his crackdowns inside Russia have riled his democratic opponents.
But a joint investigation by the fifth estate and PBSâ€™ Frontline reveals an even darker side to one of the most powerful leaders in the world: Allegations of criminal activity dating as far back as his early days as a top official in St. Petersburg; ties to organized crime and money-laundering activities; and a secret personal fortune said to be in the billions.
â€œPutinâ€™s Long Shadowâ€ also raises disturbing questions about the role the Russian security services played in four apartment building bombings in Moscow and other cities in 1999 that killed nearly 300 people â€“ a tragedy Putin blamed on terrorists and used to cement his power.
Host Gillian Findlay talks to a senior police officer who tried to arrest Putin on corruption charges; an investigator who was jailed for asking too many questions about the apartment bombings; and Russian businessmen who detail the levels of corruption and collusion.

The documentary will be shown in the US next week on Tuesday, January 13 as â€˜Putinâ€™s Wayâ€™ on PBS, as part of the Frontline series. Itâ€™s best to check your local listings to be sure of the airtime as it can differ for each PBS station. For those who watch Buffaloâ€™s WNED, it will air at 10PM EST.

On Monday TVOntarioâ€™s current affairs programme â€˜The Agendaâ€™ had 30 year international affairs veteran Matthew Fisher on to see what 2014 had in store, and right away he commented on the latest happenings in Ukraine and its relationship with Russia, the West and Yulia Tymoshenko. Worth a watch, goes for about 6 minutes:

Last night on the Slice channel, some Ukrainian flair was shown on the wedding show â€˜Four Weddings Canadaâ€™ where brides rate each otherâ€™s weddings and the winner receives a free honeymoon. A Toronto Ukrainian coupleâ€™s wedding was featured at St. Nicholas church near Trinity Bellwoods. The reception had Ukrainian dancers and helped them beat out the other brides for the grand prize, an all paid-for honeymoon. You can watch the entire episode online (it starts around 30:00):

Also, check out some pictures from the event: