At the end of last week Ukraine honored the victims of Nazi mass murders in Babi Yar during WW2:

President Viktor Yanukovych, government officials and relatives of the victims laid flowers at the monument to those killed by the Nazis in the Babi Yar ravine in the Ukrainian capital, Kiev.

More than 33,700 Jews were shot in Babi Yar over the course of two days, beginning Sept. 29, 1941, one of the most horrific killings of the Holocaust.

Yet the killing did not stop there, as the continued Nazi occupation of Ukraine resulted in tens of thousands of more deaths:

In the ensuing months, the ravine was filled with some 100,000 bodies, including those of non-Jewish Kiev residents and Red Army prisoners of the Nazis.

Mass executions at Babi Yar continued up until the German forces departed from Kiev. On January 10, 1942 about 100 sailors from a military flotilla were executed there. In addition, Babi Yar became a place of execution of residents of five Gypsy camps. According to various estimates, during 1941â€”1943 between 70,000- 200,000 Roma people were rounded up and murdered at Babi Yar. Patients of the Ivan Pavlov Psychiatric Hospital were gassed and then dumped into the ravine. Thousands of other Ukrainians were killed at Babi Yar. Among those murdered were 621 members of the Organization of Ukrainian Nationalists (OUN). Ukrainian poet and activist Olena Teliha and her husband, renowned bandurist Mykhailo Teliha, were murdered there on February 21, 1942.

In the two years that followed, Russians, Ukrainians, Gypsies, and people of all nationalities were murdered in Babyn Yar. The belief that Babyn Yar is an exclusively Jewish grave is wrong… It is an international grave. Nobody will ever determine how many and what nationalities are buried there, because 90% of the corpses were burned, their ashes scattered in ravines and fields.

So let us not forget the victims of Babi Yar, as many of them were Ukrainians as well.

Just a quick reminder that the Vegreville Pysanka Festival is happening this weekend:

The Vegreville Cultural Association welcomes one and all, participants, competitors, performers, guests and volunteers to Canada`s showcase of Ukrainian Culture. The festival is a unique cultural event drawing in visitors from near and far, and these 3 days will again display the finest Ukrainian Culture.

Experience the thrill of watching youthful competitors, novices, and seasoned veterans alike, and admire their efforts expressing their joy in life and their pride in their heritage.

Kick up your heels until the wee hours at the Friday and Saturday dances, witness the spectacle of an impromptu Hopak. Visit the cultural handicrafts exhibits and marvel at the intricate patterns of embroidery and pysanky.

Relax amid the hustle and bustle and listen to local bands, explore family history at the Trace you Ukrainian Roots Display. Watch a blacksmith draw a red hot iron from the fire and masterfully shape-it, part of our pioneer demonstrations.

Satisfy your hunger pangs with a plateful of pyrohy and kubasa.

To gear you up for Canada Day weâ€™ve highlighted our most popular posts for you. Enjoy!

It is known that Broda attended a barbecue dinner near Mundare earlier Sunday evening. The event was sponsored by the Canada-Ukraine Chamber of Commerce

Residents and leaders in Bedford have spoken out against installing the Stalin piece at the memorial.

Update: Locals are lodging formal complaints against the bust

The Bill, which was introduced in November by MNA Louise Beaudoin and received unanimous approval at first reading, commemorates victims of the Holodomor (the engineered famine in Ukraine which murdered millions of Ukrainians in 1932-33).

Weekend Watching: The Ukrainian Side Of Vera Farmiga

Just came across this video, thought Iâ€™d share. Vera Farmiga is an Ukrainian-American award winning actress whoâ€™s recently starred in such films as Up in the Air, The Boy in the Striped Pyjamas and The Departed. These movie clips are from Touching Evil (2004).

Pictures from demonstration at Russian consulate in Toronto

We mentioned earlier today of the demonstration happening at the Russian consulate in Toronto, and pictures from the event are beginning to surface.

The presidents of Ukraine and Russia, Viktor Yanukovych and Dmitry Medvedev, have laid wreaths before the Eternal Flame at the Tomb of the Unknown Soldier in Kyiv Park of Glory. The ceremony took place amid heavy rain and hail.

Then, from the Eternal Flame, the presidents went on to the Memorial to the Holodomor Victims, where they also laid wreaths and lit oil lamps to commemorate the victims of Ukraine’s famine of 1930’s.

Yanukovich had some troubles at the ceremony â€“ an eerie premonition from the countryâ€™s consciousness perhaps: â€˜Stop selling out Ukraineâ€™s national interests to Moscowâ€™ or â€˜Proclaim that the Holodomor was in fact genocideâ€™ 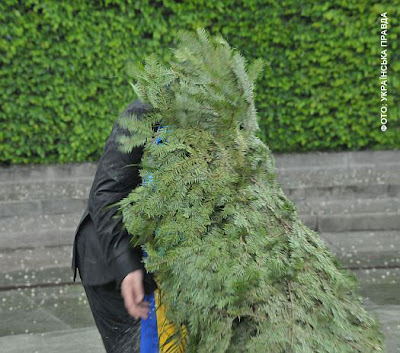 As of Tuesday afternoon, only three Ukrainian channels have aired this: Novy.tv, KanalUkraina.tv and 5.ua.
Reuters reportedly complied with the Yanukovych admin’s request to keep the embarrassing footage in the closet. [Ukrainiana]