From the Associated Press: 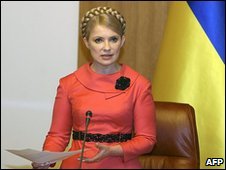 Prime Minister Yulia Tymoshenko’s pro-Western Orange coalition dissolved Tuesday as her former allies turned against her, setting her up to be ousted in a no-confidence vote.

The development spells the final repudiation of the Orange Revolution Tymoshenko helped lead in 2004, and paves the way for Ukraine’s new Kremlin-friendly president to consolidate his power.

In a sign that she will be removed, speaker Volodymyr Lytvyn told parliament Tuesday the Orange coalition had been unable to prove it still had majority support in the 450-seat chamber.

“This coalition did not come up with enough votes … I therefore announce the termination of this coalition’s activity,” Lytvyn said.

Russia’s new ambassador arrived in Kiev to congratulate Yanukovych on now appears to be total victory.

Ukraine’s political parties must now form a new majority coalition, and are most likely to group around Yanukovych’s Party of Regions. Yanukovych says that if no majority can be reached he will disband parliament and call elections.

Tymoshenko lashed out at Lytvyn, who is also a leader of the Orange forces in parliament, for “illegally ruining the democratic coalition” and paving the way for Yanukovych’s “anti-Ukrainian dictatorship.”

“This was the last barricade worth defending if we wanted to protect our independence, sovereignty, strength and the European development of our country,” Tymoshenko said in a televised speech.

“History will hold him responsible,” she said.

Tymoshenko laid out no plan of action. She said only that she would seek to unite Ukraine’s “truly democratic and patriotic forces.”

Parliament is set to hold a confidence vote Wednesday on Tymoshenko’s government.