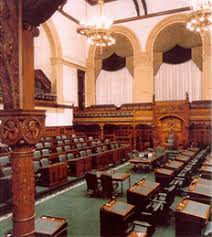 The ball is rolling on legislation that would make the 4th Saturday in November a Holodomor Memorial Day across several provinces in Canada. Last month Ontario MPP Dave Levac introduced legislature that has already passed had its second reading. The bill is being introduced while the Holodomor Remembrance Flame is touring Canada.

After the Flame toured Saskatchewan, Party deputy premier and Education Minister Ken Krawetz on Tuesday introduced similar legislation. Premier Brad Wall (who had a tape of him surface last month mocking Ukrainians) said his government could “move quite quickly” in the fall to adopt such a bill. Krawetz was appointed to the cabinet by Wall in 2007 when the Saskatchewan Party took power.

Meanwhile in Manitoba, after the Flame toured Winnipeg Selkirk-Interlake MP James Bezan tabled a private bill for Ukrainian Famine and Genocide (Holodomor) Memorial Day which has also reached its second reading. You can watch his speech that he addressed to the House of Commons below. James Bezan is of Ukrainian descent.

Some sources are reporting that Alberta already has a Holodomor day, but I could not find any information on it. If anyone has any, please post a link in the comments!

UPDATE: Added some some more newspaper links and Google Video