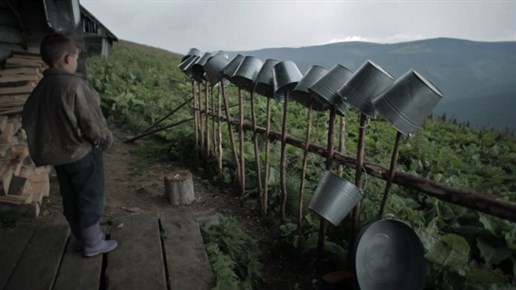 The HotDocs documentary film festival has always shown movies about Ukrainians or set in Ukraine,  but now it will finally debut an official state film from the National Cinematheque of Ukraine:

Set in the breathtaking Carpathian Mountains of Ukraine, Living Fire is a captivating story of three shepherds, each at a different stage in his life. Living in a world bound by tradition, they reflect on the meaning of their own existence as the contemporary world begins to encroach into their remote community. 10 year-old Ivanko must leave a carefree childhood behind as he transitions into adulthood. 39 year-old Vasyl reflects on a youth lost as he toils with unforgiving daily labor. Ivan, at 82, is recently widowed, and reflects with gratitude on a life that was good when rooted to a bountiful land. As the snow begins to melt and spring approaches, all three men prepare to begin the difficult journey of following their sheep into the mountains, a journey that his been a part of their families for generations. But with the temptations of an easier contemporary life and the pressures of modernity, they find themselves caught between two worldsâ€”and the struggle to maintain their way of life becomes increasingly difficult.

Tickets are regularly $17. Students & seniors with ID can attend Fridayâ€™s showing for free.