PHILADELPHIA (AP) A Philadelphia woman separated from her family by the Nazis is preparing for a reunion with a brother she hasn’t seen in 66 years.

Irene Famulak was 17 when the Nazis invaded the Ukrainian Catholic family’s home in 1942. Famulak was sent to be a cook in Germany and never saw another family member again. But that’s about to change.

The Red Cross says the 83-year-old’s youngest brother Sevelud has turned up in Germany trying to trace his sister.

Video coverage is available here, here, here and here, as well as a slideshow.

Interestingly enough as this article was re-published across various news sources, only the Associated Press maintained in their article that the family was Ukrainian Catholic. Why would so many news sources leave this fact out?

Out of the 11 million Hitler killed, six million were Jews but the rest are commonly forgotten as ‘the others’; Christians (Protestant and Catholic), Hungarians, Czechoslovakians, Ukrainians, Russians, Dutch, French and even Germans. Ukraine lost up to 7 million people during the War (roughly 17% of its population), following a plan to re-populate Ukraine with the Aryan Race (although not the first time this type of event has happened).

Last weekend, the Holodomor Remembrance Flame made its way to Chicago (pictures here) after receiving little media attention from the West Coast. Unfortunately there was no mention in the Chicago media, such as the Times or the Tribune, despite the large population of Ukrainians there.

During the week the Flame made its way to Parma, Ohio where it received some media attention (video here).

Off to Pittsburgh next where I couldn’t find any reports on its passage there. The day after that on Thursday it headed to Buffalo where a local news station covered it (even calling it a genocide!). The Flame was presented there by a Holodomor survivor, Mrs. Dranka. Last night the flame was in Rochester, no reports have popped up yet.

Today the Flame heads to Connecticut where it is receiving a very good amount of press anticipating its arrival. UPDATE: A newspaper article covering the event.

UPDATE #2: Pictures from the Holodomor Torch and Walk Against Genocide in Battery Park NY May 27 2008

After making its last Canadian stop in Vernon BC, the Holodomor Remembrance Flame entered the US with little media fanfare. No coverage from its first stop last Sunday in Seattle, although an editorial appeared in the Seattle Times promoting the event even if some of the information wasn’t accurate (no mention of Holodomor, stated the famine was for political purposes rather then ethnic cleansing, and the estimate of deaths off by about 5 million).

No love in San Francisco either as the San Francisco Chronicle being the second largest circulated paper on the west coast provided no coverage the next day. As the Flame rolled into Los Angeles mid-week, it was very disappointing to see no coverage in the LA Times, the largest circulated paper on the west coast. At least they printed Jonah Goldberg’s (author of the great book Liberal Facism) column defending the genocide accusation. Cyber Cossack printed a brilliant letter to the editor of the ‘Times, asking where was the media that day and breaking down the paper into what they deemed more important to cover (Britney Spears was next door applying for custody of her children).

It wasn’t until Thursday that the first press coverage began in the Mid-west. The Salt Lake Tribune and the Deseret News reported on the Flame coming through Salt Lake City, Utah (although Deseret News re-published their article’s title downplaying ‘famine, genocide’ to the more neutral ‘tragedy’, sound familiar?).

Things are looking better for the Flame as it heads to the east coast though, there is some coverage in anticipation of the Flame in Chicago (it came this weekend), Parma, Ohio on Tuesday, Pittsburgh on Wednesday and Hartford on Saturday.

It’s my first attempt at Google Maps, and I still have to add the international dates. Hope you like it!

From the Ottawa Citizen:

Communism “still haunts the world,” and that’s why a group representing some 240 Polish-Canadian groups, as well as groups representing Canadians from 10 other ethnic backgrounds are advocating for a monument to the victims of Communism to be erected in downtown Ottawa.

“In Russia, one-third of the people believe that Stalin ‘did more good than bad for the country,’ according to a recent poll. In China, thousands of dissidents are imprisoned in the slave labour camps known as the laogai. In North Korea, masses starve as the leadership threatens to unleash nuclear war. In Cuba,
dissidents are routinely imprisoned for peacefully petitioning for democratic reform.”

Mr. Lizon, who lives in Toronto, was in Ottawa yesterday for the screening of Katyn, a film about Polish officers killed by Soviet secret police during the Second World War. At the same event, an exhibit dedicated to the victims of Holodomor (the Great Famine) in Ukraine, was presented. Both events, held at the National Gallery, were organized by the Embassies of Poland and Ukraine, in collaboration with Mr. Kenney, the Canada-Poland Parliamentary Friendship Group and the Canada-Ukraine Parliamentary Friendship Group.

At first one part of the body is missing, than another and another until the figure seems to totally disappear into the void. Situated in the Lesser Town under Petrin hill, the memorial is the work of a renowned Czech sculptor Olbram Zoubek and architects Jan Kerel and Zdenek Hoelzel. Unfortunately one of the statues has been destroyed during a bomb attack in 2003.

Meanwhile many former Communist countries are trying to shed their haunted past to a more democratic future.

Last summer Estonia planned to remove a tribute to Red Army soldiers who died fighting Nazy Germany. Not only did violence ensue by ethnic Russians leading to a fatal stabbing, but a vicious cyber-war which shut down much internet access in Estonia lasted for several days.

Tension also arised in Poland and Ukraine over removal of monuments and renaming of street names. But after much global embarrassment over the cyber-war, it seems Russia is going back to its old tricks of waging war through infiltrating mainstream media with propaganda such as here and here. They are now charging the changes of “Facism” and “Neo-Nationalism”. Unfortunately it’s not always confined to Russian media, this NY Times article spent most of its time arguing whether Ukrainian monuments belong in Washington, including the Taras Shevchenko monument erected by former US President
Eisenhower in 1960 (also admired by another former US President John F. Kennedy and former Canadian Prime Minister John Diefenbaker) and upcoming Holodomor memorial also in DC. 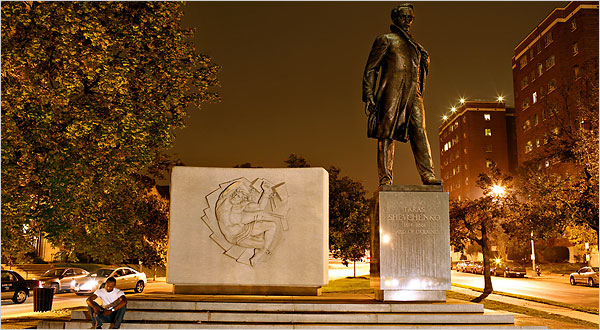