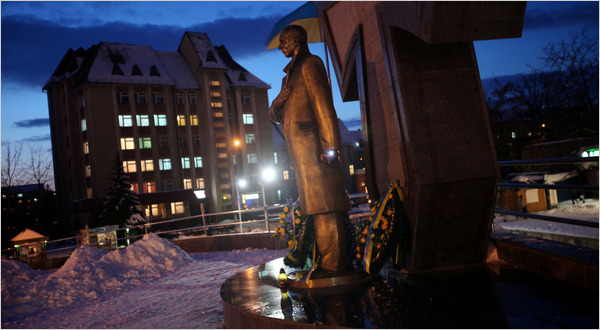 While this one slipped through the cracks of the news cycle a few weeks ago itâ€™s certainly still worth mentioning – from the New York Times:

President Viktor F. Yanukovich of Ukraine announced Wednesday that a national award bestowed on one of the most divisive figures in the countryâ€™s modern history â€” a leader of the Ukrainian partisans during World War II â€” had been officially revoked.

The award dispute reflects the longstanding geographic schism in Ukraine and its impact on the nationâ€™s politics. Mr. Bandera, who was assassinated by the K.G.B. in 1959 in West Germany, where he lived in exile, is revered in western Ukraine as a patriot who led the struggle for independence from the Soviet Union and Poland. But he is reviled in other, more pro-Russian regions as a Nazi collaborator. European and Jewish groups have called him a fascist who condoned massacres of Jews and Poles.

Mr. Banderaâ€™s supporters have argued that he never had a close relationship with the Nazis, pointing out that he was later detained by the Nazis and sent to a concentration camp.

Mr. Yanukovich had the award canceled through the courts, not through a presidential decree, apparently deciding that such a method would be less provocative. In Ukraine, as in much of the former Soviet Union, the judicial system tends to have little independence, and typically follows the will of the executive branch.

With support from the new president, a Ukrainian lawyer last spring convinced a court to revoke the award, and subsequent appeals courts have upheld the decision, officials said.

On Wednesday, Mr. Yanukovichâ€™s office indicated in a statement that the judicial process had ended and that the award was formally annulled.

The statement did not offer further comment. But Mr. Yushchenkoâ€™s party, Our Ukraine, denounced Mr. Yanukovich for â€œattempts to rewrite the history of Ukraine and to belittle â€” in order to please Moscow â€” the heroes of the Ukrainian people.â€